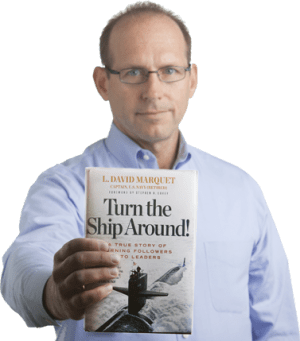 Capt. David Marquet took control of the nuclear powered submarine, the USS Santa Fe, in 1999. When he stepped on board, the Santa Fe was the worst performing submarine in the US Navy’s fleet. To add to the challenge, he was trained to become captain of a different submarine.

Shortly after taking the helm he realized everything he knew about leadership wasn’t going to work. The traditional top-down, leader commands followers, was ineffective and not the best situation for him and his crew.

The Santa Fe became the best in the fleet and the changes continued to this day. His leadership wasn’t about him. It was about empowering his team to achieve what they needed. And it lasted long beyond his tour. The Santa Fe continued to receive awards for the most combat-effective submarine in the squadron. Many of his crew have gone on to become leaders in their fields, and in the US Navy. And that’s the legacy of a solid leader.

David’s book, Turn The Ship Around documents what happened and the steps they took to go from the bottom of the fleet to the top. And how you can also put the principles into place in your organization. It’s one of the best books on leadership and building a team I’ve read.

Listen to David Marquet in this episode:

You can find David Marquet here: